In Part I of this series on the Illinois Concealed Carry Law I discussed the issuance of permits, the qualifications for obtaining a permit, and the training you need to get a permit. The concealed carry law is officially codified as “Firearm Concealed Carry Act” at 430 ILCS 66, et. seq. In this part, I’m going to discuss what type of weapon can be carried, where you cannot carry a concealed weapon, and what happens when you break this law.

What Kind of Weapon Can I Carry Concealed? 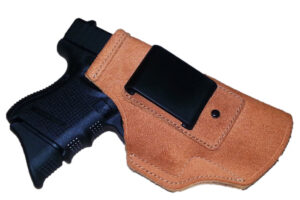 Simply put, you can carry a concealed handgun. But what does the law consider a handgun? The law defines a handgun as, “any device which is designed to expel a projectile or projectiles by the action of an explosion, expansion of gas, or escape of gas that is designed to be held and fired by the use of a single hand.” 430 ILCS 66/5. This excludes weapons like stun guns, machine guns, short-barreled rifles, shotguns, pneumatic guns, spring guns, paint ball guns, or BB guns firing less than 700 feet per second.

This is a common sense view of what most people think a handgun is. It means that assault rifles, shotguns, assault rifle variants, or long guns cannot be carried concealed. Some firearm manufacturers have AK-style “pistols” that do not qualify under this definition either. Those types of weapons are considered short-barreled rifles and are specifically prohibited by the statute and Illinois law generally.

No, you cannot carry a concealed weapon wherever you want.

Another prohibited area you need to be aware of is any special event where a liquor license has been issued under the Liquor Control Act. Any public gathering or special event, if local government requires a license for the event, is also prohibited. Yet another location you cannot carry concealed is any facility that earns more than 50% of its income from the sale of alcohol. The onus is put on the owner of any facility that serves alcohol to put up the state approved signs warning people that they are not allowed to carry concealed in that facility.

The owner of private property also has the ability to restrict you from carrying a concealed firearm on his/her premises. The owner of that property must post the sign approved by the Concealed Carry Law. The signs are uniform with the black silhouette of a firearm with a red circle and strikethrough over the firearm. The signs must be a minimum of 4 inches tall by 6 inches wide and posted at the entrances to the building. The only exception to this is private property used as a residence. If a person doesn’t want concealed firearms carried on their residential property, telling people not to is enough without the signage.

The last place that I want to mention is a big one: any property owned or regulated by the Federal Nuclear Regulatory Commission. Most of the other sites allow for the storing of your firearm in your vehicle, even in the parking area of a prohibited facility. However, on federal nuclear sites, there is no such “safe haven.” If you have plans to visit a property under control of the NRC, do not bring a gun with you… period.

So Where Can I Carry a Concealed Firearm Then?

Everywhere else not prohibited by the statue. I know that’s a cheesy answer but it’s really the simplest answer. As you go about your day, take note of how often you visit the types of properties listed above. You’ll be surprised that you can carry in a fair amount of places, even with a large list of prohibited sites. Also, if you travel to places where concealed carry is prohibited, you can simply leave your weapon stowed securely in your vehicle. Obviously, this doesn’t apply to property under the control of the Nuclear Regulatory Commission.

Since I touched on it here, let me add that it would be a very good idea to have a solution for locking your firearm inside your vehicle. Not simply throwing it in the trunk. I’m talking about securing it inside of a safe that is mounted to the vehicle or attached in some manner. The last thing any firearm owner needs is to have one stolen because someone wanted to steal something out of his or her car.

So What Happens If I Violate the Concealed Carry Law?

Also, any person convicted of a violation will pay a $150 fine to be deposited into the Mental Health Reporting Fund along with any associated court costs.

Although you won’t lose your license for a first, or even second, violation of the Concealed Carry Law there’s still a lot of incentive to follow the law here. Not only could it result in criminal conviction, there’s a monetary penalty that must be charged.

This is a good spot to end this second part on the Illinois Concealed Carry Law. In the third, and final, part I will discuss interactions with law enforcement while carrying concealed and some general thoughts on exercising your right to carry a concealed firearm here in Illinois.